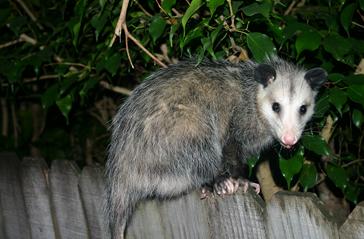 The opossum or possum is the only marsupial (a pouched mammal) found in North America. The opossum's habitat is diverse, ranging from woodlands to open fields. They are most commonly found around streams or other wetland areas. However, in  the urban areas of Louisville, Kentucky they seek shelter in attics, garages, chimneys, under houses, or in any other place that offers protection. Although very common in urban areas, opossums are rarely seen because they are nocturnal. Opossums are omnivores and eat a wide variety of foods. Their primary food is animal matter such as insects, earthworms, small rodents, snakes, snails, birds and frogs, but they also eat many kinds of fruits, berries and vegetables. In Louisville's urban areas, they may eat pet food, fruit on trees, pecans, seeds in bird feeders and garbage in trash cans.

Opossums sometime play "possum" (pretend to be dead) when frightened. Do not approach or attempt to touch an opossum exhibiting this behavior. They frequently "revive" and become extremely defensive. Opossums are capable of transmitting several different diseases. Because opossums salivate heavily, people may assume they are rabid. Even though opossums can potentially transmit rabies, they appear to be very resistant to the disease and are not considered serious rabies vectors. Opossums may also transmit Murine typhus or other diseases to people or pets through the fleas that infest them. Where opossums are common, pet owners should be diligent in controlling fleas on their animals.

An opossum in your Louisville house should be removed immediately. If you suspect you have an opossum in your attic, under porch, under sheds, utility building or opossums in your chimney you should call our opossum removal specialist immediately. Our wildlife control specialists have the necessary training and skills to remove your nuisance opossum and complete the necessary repairs and exclusion techniques to keep opossums out of your home. We get rid of opossums by humanely and safely trapping opossums.