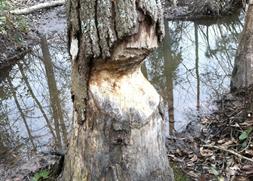 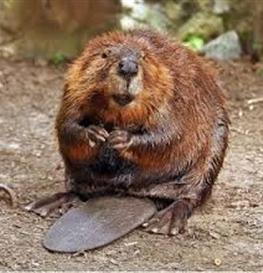 A significant but often overlooked consequence of beaver dams is damage to Kentucky’s public roadways. Water drainage ditches on the edge of roadways offer good habitat for beaver. Dams can flood the road or, in some instances, damage the road itself through erosion. Beaver dams and the flooding they cause have resulted in roads being closed, bridges and culverts requiring replacement, and occasional car accidents.

Beaver can obstruct water control devices and damage structures by burrowing. Irrigation canals and drains often are plugged by beaver and must be cleared. Beaver can cause water control structures, often used for temporary flooding to create waterfowl habitat, to be useless. Kentucky pond owners should be particularly watchful, because beaver can cause substantial damage to pond dams by burrowing into them. 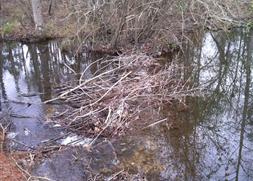 Using their large, continuously growing teeth, beaver will gnaw bark around the base of a tree for food and sometimes fell the tree. The tree dies, causing a financial loss for the timber owner. This loss can be significant, particularly if high-grade hardwood trees are damaged. More importantly, beaver dams can cause flooding over large areas of timberland. If water is not quickly drained, trees will die and become unmarketable.

Homes and Other Buildings

In situations where beaver and humans both live, floodwater can cause significant damage to human homes or other structures. In some instances, entire subdivisions or neighborhoods have suffered water damage. Occasionally, beaver may cause direct damage to wooden structures, such as backyard decks, and boat docks by gnawing on the wood, thus causing appearance and structural problems.

The Problems Caused by Beaver

Flooding caused by beaver dams can damage timber, agricultural crops, homes and other structures, roadways, and ornamental or garden plants. In fact, the U.S. Department of Agriculture estimates that beavers annually cause about $100 million in damage to public and private property.

Many of the drainage and flooding problems in Kentucky are caused by beaver. Beavers also cause thousands of dollars in damage to boat docks on, Rough River and the many other lakes and ponds throughout the state. The beaver is a large aquatic rodent (25 to 75 pounds in weight) with a flat, scaly tail and webbed hind feet. Beaver eat aquatic plants and the bark, leaves, and twigs of many trees and shrubs. They will live nearly anywhere that has enough food and a permanent water supply, including lakes, rivers, creeks, ponds, or springs. Beaver commonly build dams to flood areas, so they can get to food, and hide from predators.